Hello, I'm Indigo and this is my video game walkthrough blog. I'm not amazing but I try my best. I mostly do rpg's because faster paced games are more difficult to screenshot, but that's mostly what I play to begin with so it works out well. Games are mostly going to be Nes/Snes/Gameboy/Gameboy Advance. I hope what I've done can be helpful!

After we've defeated the Goldenrod gym leader, head into the upper of the two houses directly to the right of the gym. 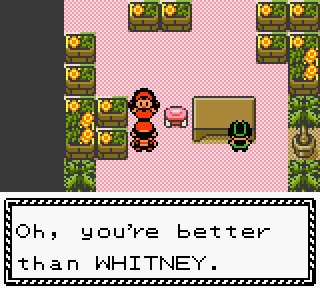 Yes I am, thank you for noticing. Since we have the Plain Badge, this lady will give us the Squirt Bottle. Heal at the Pokemon Center, and then make your way all the way north of the city and then east, onto route 36. Head up to the wiggly brown thing, then inspect it and use your new item. 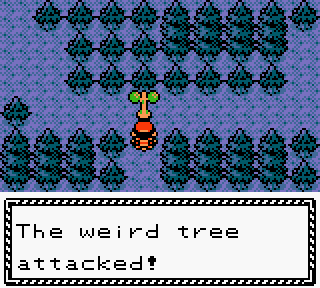 Uh-oh. Turns out the tree was a Sudowoodo, a Rock-type Pokemon that comes at level 20. This is the only one in the game, so make sure you catch it. It can be a pretty tough opponent, it knows Mimic and Flail. Even once you get its hp down it can resist capture fairly well. I think this playthrough was the easiest I have ever caught it before - I only used a single Great Ball.

Go east and talk to the guy in the blue shirt to get TM08 Rock Smash. Then go back and head north.

To the east are three trees which will give you a Red, Blue, and Black Apricorn respectively. 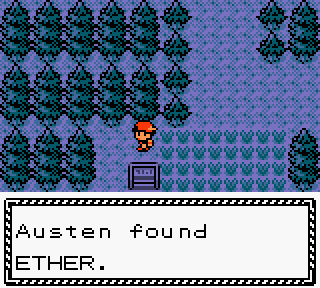 After you've beaten the trainer standing in your way, grab this hidden item off the ground. 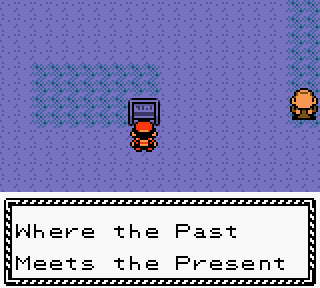 Head north about five more steps and you'll have arrived in Ecruteak City. 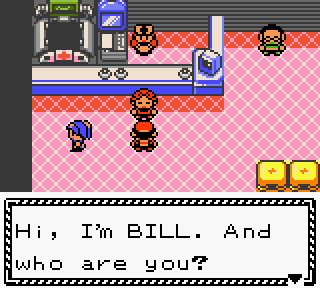 When you enter the Pokemon Center in Ecruteak City, you will run into Bill. Exit, and then in the house directly to the left you can find a man who will give you the Itemfinder.

Next go to the building just above the Pokemon Center. All of the girls up on the stage here will battle you, so I'll cover them from left to right. 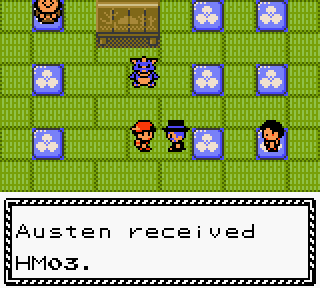 Once you've beaten all five girls, talk to this man to receive HM03 Surf. We can't use it outside of battle until we get this city's gym badge, but that's a concern for later.

Exit and go through the gate on the west side of town.

West of this guy is a tree that will give you a regular Berry. 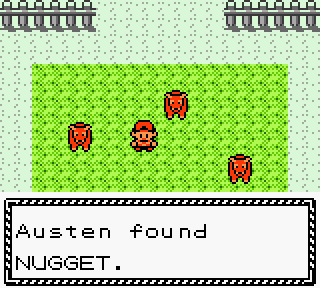 Walk in amongst the herd of Miltank and get a hidden Nugget here. There's also a Mint Berry tree up near the barn (these cure sleep). If you go into the small building and feed the sick Miltank 7 regular Berries, the man in the main house will give you TM13 Snore. 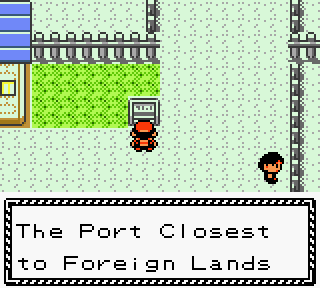 Our stay in Olivine isn't going to be a very long one, for now. Stop by the house south of the gym and talk to the man to get the Good Rod. 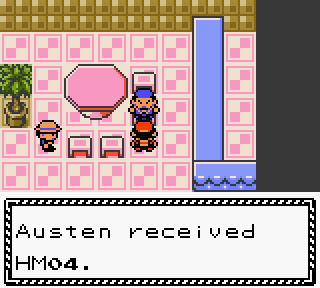 Next head to the building beside the Pokemon Center and talk to the sailor to get HM04 Strength. Now that we have this, we can go back and explore our last destination in Ecruteak before we take on the gym. It's in the northwest corner of the city.

You will immediately be challenged by your rival here.

When you're done you are free to roam around, but note that you need to be able to use both Rock Smash and Strength. 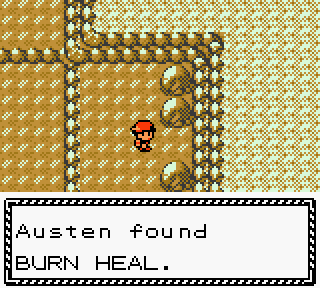 First go right and drop through the hole there to access an area with this hidden item. Jump off the ledge to the left and go back upstairs, then go right again and smash the rock this time. Go up to face the trainer. 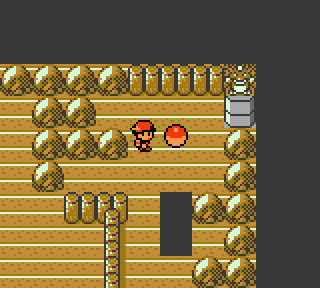 Go up  and get another Burn Heal, then drop down the hole. 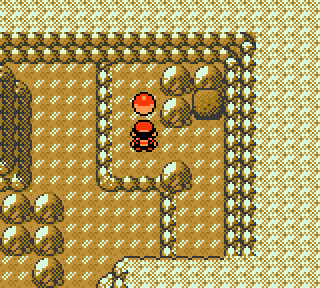 Push the boulder out of the way and then check the item ball for TM20 Endure. Jump over the ledge and go back to the ladder. 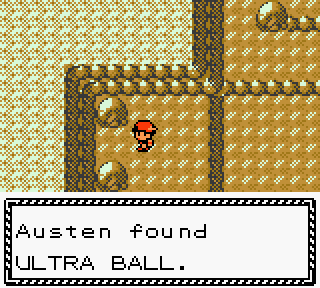 This time go left, and once again jump down the first hole you see to access a hidden item. Go back up the ladder and continue up, dropping down the larger pit right by the breakable rock. 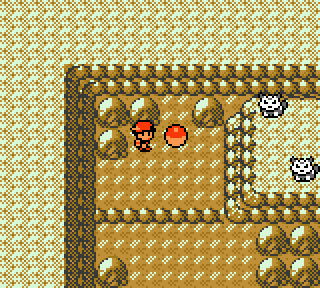 Get the HP Up here, then go back up the ladder, left, and up through the small rock. 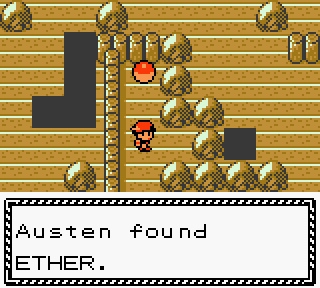 Make your way around to this hidden item, then get the X Speed from the ball above it. When you're done, go back and drop down the small hole. 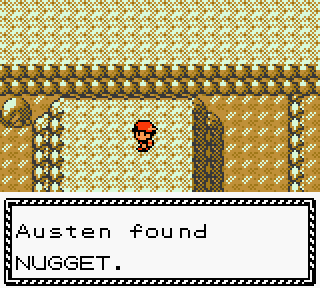 When you climb the steps, three Pokemon will come alive and run away. These are legendary Pokemon; Suicune, Entei, and Raikou. From now on they will be running around the Johto region, appearing in random areas. If you happen to be in the same area as them, you have a 100% chance of encountering them (only once for each appearance). They will always run away from the battle immediately, even if they are asleep. You have to weaken them little by little. All three are level 40.

Once they're gone, you can get the hidden item in the middle of the platform and then leave the Burned Tower entirely. Time to take on the gym, a last!

The trainers here use Ghost type Pokemon - specifically the Gastly line. If you managed to catch a Snubbull and train it up to a decent level, it will work well here - its Bite will be super-effective and it will be immune to all the Ghost Pokemons' regular attacks (it will still be effected by Curse). A Kadabra will work well against most of the regular trainers' Pokemon since they are all part Poison, but the gym leader's Pokemon will take one out quickly with their super-effective Shadow Ball attack. If you have a Spearow or Pidgey, they might do well with some strong Flying-type attacks, but any Normal or Fighting attacks your Pokemon have will be useless. A Water, Fire, or Electric type Pokemon can also do well here, as will a Pokemon that knows Dig or Magnitude. Ground type moves will be super effective against the part-poison ghosts.

If you step off an invisible path in this gym you will get transported back to the entrance, but the path is pretty simple. Just walk in a straight path in front of one trainer, and then straight up so you stand right in front of the next one. 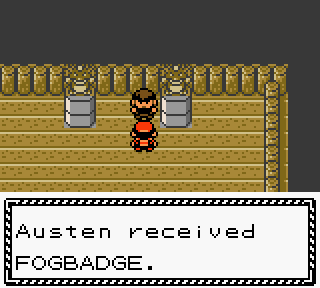 .
The Fog Badge grants you permission to use Surf outside of battle, opening up a bunch of things to us which I will cover in the next section. You also get TM30 Shadow Ball. Pokemon all the way up to level 50 will also obey you without question now.

And that's that for that!

My Team So Far